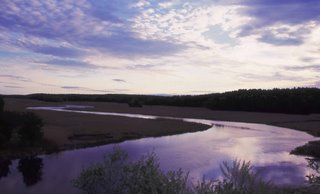 I took this photo at 6 a.m. from the side of the highway. While photographing, a police car came up behind me and loudly announced from his car that I was not allowed to be there. It didn't matter because I had already taken the photos that I wanted. I'd like to capture this scene in all the four seasons, but I might need a police escort first.
Posted by Maria's Photos at 4:44 PM